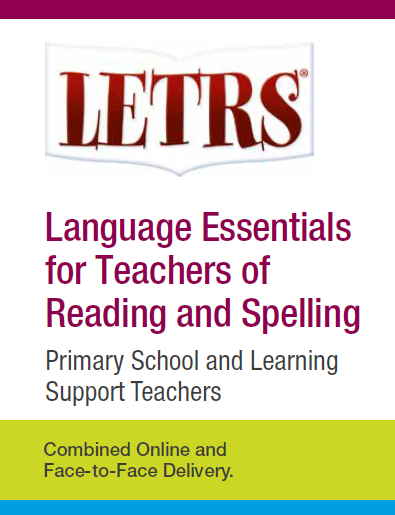 LETRS is a research-based professional development that leads to more effective instruction and improved student outcomes. The course is now available in Australia as a two-year course of study incorporating online coursework, in-person workshops, accompanying print resources and online support.

Courses in South Australia and Western Australia are already in progress and new dates will be released soon.

A LETRS brochure can be downloaded here and course dates are listed here. 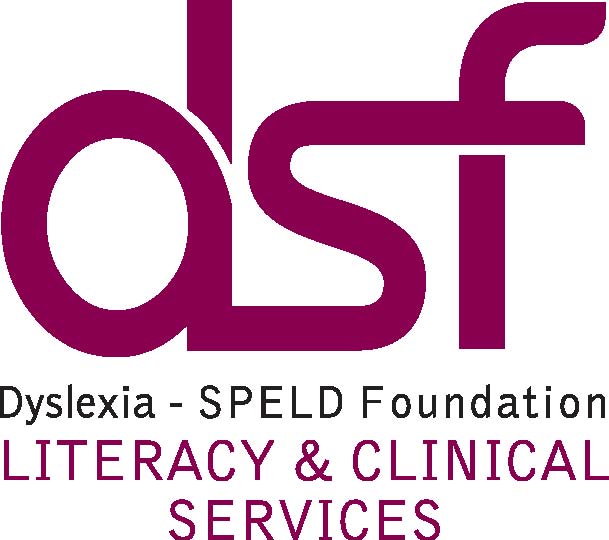 The Understanding Learning Difficulties e-Learning course was designed by DSF (Dyslexia-SPELD WA) and is proudly supported by AUSPELD. This online learning program consists of six interactive modules that systematically cover: an introduction to learning difficulties and learning disorders; the cognitive processing skills implicated in learning; and, the response to intervention model. Participants will also learn about how to reduce the incidence of literacy and numeracy difficulties, remediate learning difficulties and put in place appropriate support strategies and accommodations.

This DSF e-alert focuses on the NCCD and what it means for students with learning disorders.

Sign up for the AUSPELD/DSF e-alert parent newsletter here

The Disability Discrimination Act 1992 (DDA) and the Disability Standards for Education 2005 (DSE) require that all Australian students with disability must be able to access and participate in education on the same basis as their peers. Under the DDA, disability includes:
“A disorder … that results in the person learning differently…”

Adjustments may be necessary in order to ensure that students with disability have access to education. These adjustments are based on the professional judgements of teachers, in consultation with the student and/or their parents, guardians or carers. Students with learning disorders (including Dyslexia, Dysgraphia and/or Dyscalculia) are eligible for adjustments to ensure they have access to education. Adjustments may include the provision of text-to-speech and speech-to-text assistive technologies, extra time to complete written tasks and/or intensive intervention using a structured and systematic evidence-based program (see below for further information).

Appropriate adjustments for students with Reading Disorders (Dyslexia) can be found here. 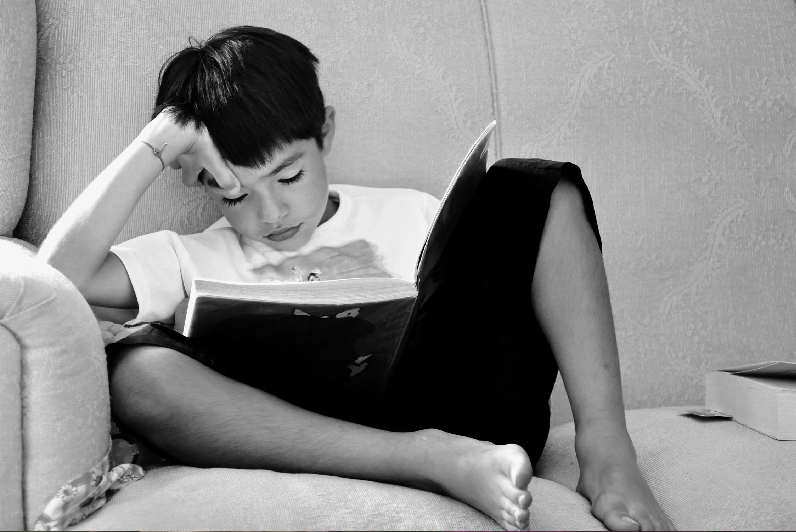 The Nationally Consistent Collection of Data on School Students with Disability (NCCD) is an annual collection of information about Australian school students who are receiving adjustments due to disability. The data collected from the NCCD is used by teachers and schools to improve understanding and inform planning. Students with a learning disorder who require adjustments in the classroom (as defined according to the DDA) are included in the NCCD.

The NCCD website includes information about how the NCCD should be integrated in the continuing process of teaching and learning in school. The website also includes a range of resources and tools to assist teachers and schools in planning and implementing the NCCD. Information about learning differences, learning difficulties, learning disabilities and the NCCD is available here. Another relevant resource is a podcast series featuring students, parents, teachers and experts in specific areas related to the NCCD.DSF CEO Mandy Nayton, OAM, was interviewed recently for the NCCD podcast on Classroom Adjustments: Specific Learning Needs Dyslexia and Classroom Adjustments: Specific Learning Needs Dysgraphia. The podcasts focus on potential educational adjustments that can be made in class for students with learning disorders. To listen to the podcasts, click on the links provided or search for “Classroom Adjustments” in Apple podcasts, Spotify, Google podcasts or wherever you get your podcasts to listen via your mobile device.

Appropriate adjustments for students with Written Expression Disorders (Dysgraphia) can be found here.

The Summer 2018 edition of the DSF Bulletin featured the following article on Structured Synthetic Phonics Program (SSPP) sequences. It details each the phonics sequence of a number of SSPPs, from single letter phoneme-grapheme relationships and digraphs through to the introduction of the alternative spellings in the extended code.

Find this and other articles on the AUSPELD Articles page. 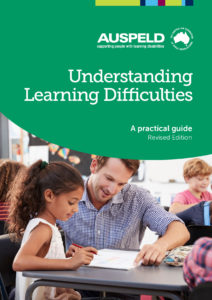 Many teachers, principals and families will be familiar with the two AUSPELD Understanding Learning Difficulties Guides, originally released in 2016. The teachers’ guide was designed to provide primary and secondary school teachers throughout Australia with a greater awareness and understanding of the significant impact learning disorders can have on students, and to provide information relating to the components of high quality instruction, evidence-based intervention and effective accommodation. The guide for parents was subsequently released and converted to an engaging and informative web-site for those parents keen to access the contents via the internet. This remains available at www.uldforparents.com. We are delighted to announce that a revised version of the Teachers’ Guide and a revised version of the Parents’ Guide will be available in January. These Guides will include updated information and new sections focused on up-to-date research findings and such topics as Developmental Language Disorders and Developmental Coordination Disorders. There is additional information on recommended strategies and programs as well as updated information sheets (on the enclosed CD). The Guides will be valuable resources for teachers and other professionals working with students with learning challenges. To pre-order a copy (or copies) of one or both Guides please complete this form. 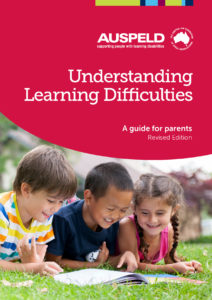 With the increasing use of technology in today’s society, the question arises as to whether we still need to teach handwriting to children.  Research has indicated that there are benefits from handwriting instruction that go beyond learning to write (Dinehart, 2015).  Firstly, there is a strong link between developing motor skills and developing cognitive skills. When children learn to draw letters by hand, their later recognition for those letters is better.  As a result, children not only learn to read more quickly when they first learn to write by hand, they also remain better able to generate ideas and retain information. Learning to form letters activates the neural pathways associated with successful reading, thus handwriting forms an important component of early literacy instruction.

Other research has shown that note-taking with a pen, rather than a laptop, gives students a better grasp of the subject.  While individuals who rely on word processing using a laptop or other device tend to take notes verbatim, those working with pen and paper rephrase and summarise information as they take notes. The process of note-taking with pen and paper encourages deeper processing of the information.

Dr Virginia Berninger, a prominent researcher in the area, promotes teaching children to be ‘hybrid writers’.  This means instruction in print first for reading — it transfers to better word recognition — then cursive for spelling and composing. Touch-typing should ideally be introduced in upper primary according to Dr Berninger.

It is recommended that handwriting instruction is addressed in the following ways:

Handwriting problems often arise from a difficulty in automatically remembering and mastering the sequence movements required in writing letters or numbers.  If left unaddressed, these difficulties can affect a student’s ability to express themselves in writing.  Ongoing difficulties with automatic letter formation often lead to avoidance of writing and therefore reduced practice, which leads to further difficulties.  Explicit handwriting instruction in the early years is therefore key to preventing later difficulties. 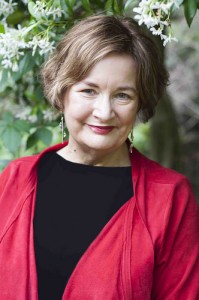 AUSPELD extends congratulations and accolades to Jackie French for her well-deserved award of Senior Australian of the Year on Australia Day. Jackie has been a long term supporter of many of the State and Territory SPELDs and has already done so much to encourage and support Australian children and adults with learning difficulties. She is an inspiration to so many, and, as a person who has experienced first-hand the challenges of attending school with dyslexia, is able to speak from the heart about the importance of providing effective support and encouragement to all students.

Earlier this year the Federal Government established a review of the process and development of the Australian National Curriculum.

Professor Ken Wiltshire AO, the J.D.Story Professor of Public Administration and Leader of the Not for Profit Unit at The University of Queensland Business School, along with Dr Kevin Donnelly, Executive Director of the Education Standards Institute and Senior Research Fellow at the Australian Catholic University, were appointed to carry out The Review.

The Review of the Australian Curriculum Final Report was released in October 2014 and three weeks later the Initial Response from the Australian Federal Government was also released.

The Australian Curriculum: English should be revised to place greater emphasis on a more structured and systematic phonics and phonemic awareness approach during the early years of reading.

The full Review of the Australian National Curriculum, the Federal Government’s Response to The Review as well as all submissions considered in writing The Review can be downloaded through StudentFirst website. See; http://www.studentsfirst.gov.au/review-australian-curriculum

AUSPELD will be proud to welcome Neil Mackay to Australia for a series of entertaining and educational workshops in 2012.

Neil Mackay is an educational consultant and trainer who created the concept of Dyslexia Friendly Schools in the UK. He is an experienced teacher who has taught for 26 years, working with children of all ages with a wide range of needs and abilities. There will be workshops for teachers in Brisbane, Sydney, Melbourne, Adelaide and Perth as well as parent workshops in some cities (TBA).

Brisbane – May 28th and 29th (visit www.speld.org.au for further details)

Neil is known for his ability to bring the classroom into his training and for providing lively, entertaining and thought provoking opportunities for teachers and allied professionals to reflect on and develope their practice. He has written a number of books including the extremly popular Removing Dyslexia as a Barrier to Achievement and Taking the Hell out of Homework. Both books are available though AUSPELD, click here for info.